We all love to recall memories. Being a motorcycle owner it’s just so exciting to watch & share yourself touring and creating beautiful memories of your adventure trips. People often think all action cameras are the same. Although the best GoPro for motorcycle riding demands a few features to be mandatory.

In this article, we would edify you with the features you need to look at before getting yourself a GoPro for motorcycle vlogging. Also after using several action cameras by our team of street bikers we have shortlisted & reviewed the best GoPro for motorcycles.

If you are not much of a reader we have listed down a table below. 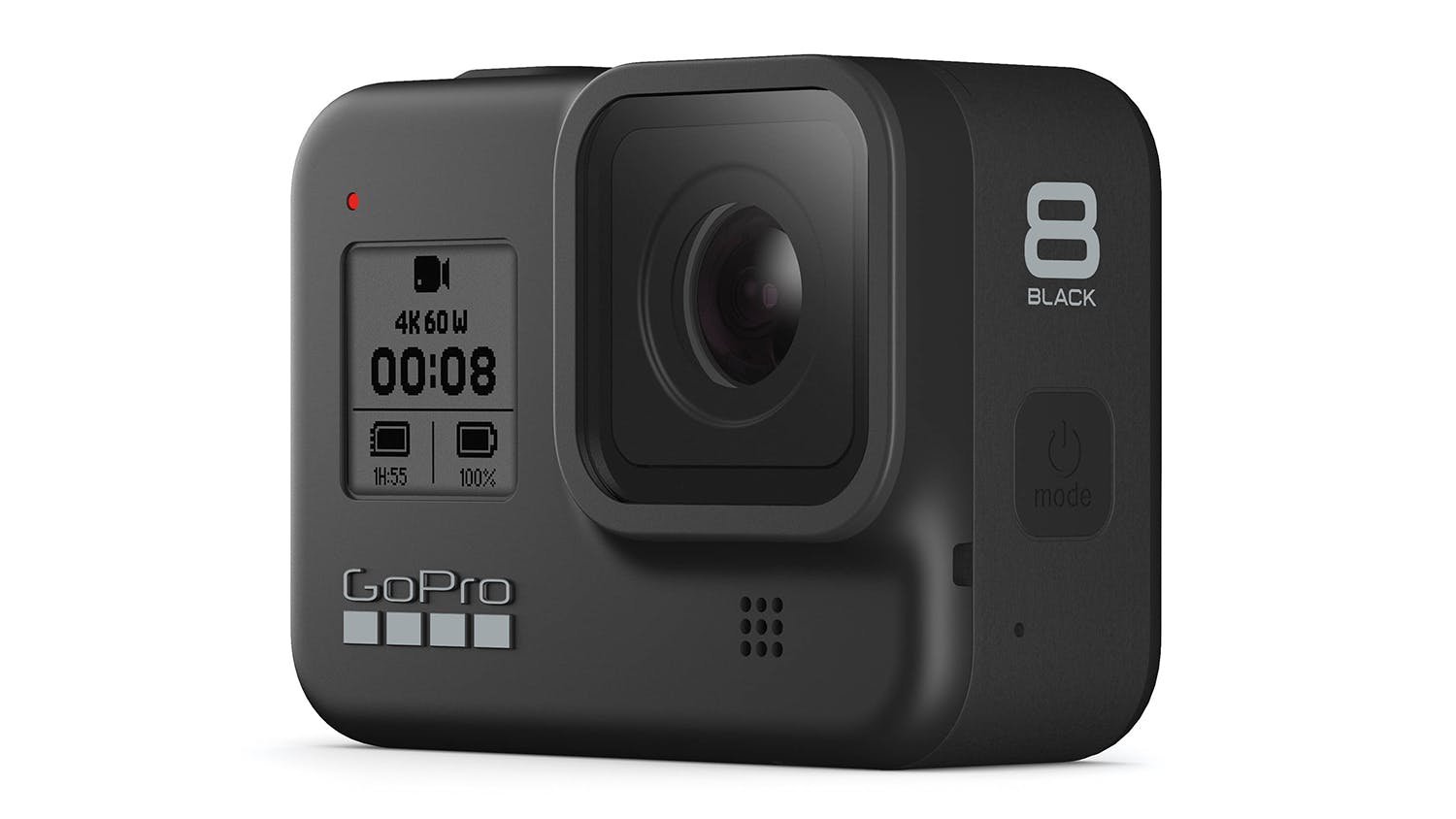 One of the most popular GoPro for motorcycle is the GoPro Hero 8 Black. The latest Hero 8 is probably the best option for moto vlogging. With tons of amazing shooting options, the hero 8 will capture your every stunt without losing its cool. From hardware design to software updates GoPro has made several changes to the Hero 8 as compared to its predecessors.

Though being the most expensive GoPro in the list the Hero 8 packs incomparable features such as electronic image stabilization which is outstanding with Hypersmooth 2.0 stabilization.

Another great feature is the Timewarp 2.0 which automatically adjusts lighting and motion stability. The Hero 8 Black has a better noise reduction feature with its inbuilt mic.

Not to worry it also has a 3.5 mm jack in case you want to use an external microphone. The action camera is waterproof up to 10 meters and holds a gorilla glass lens. If you have the budget then nothing else can be better than the Hero 8 Black.

It’s super vlogger friendly, helps you to take stunning footage at extreme motorcycling conditions, and is built with strong hardware. 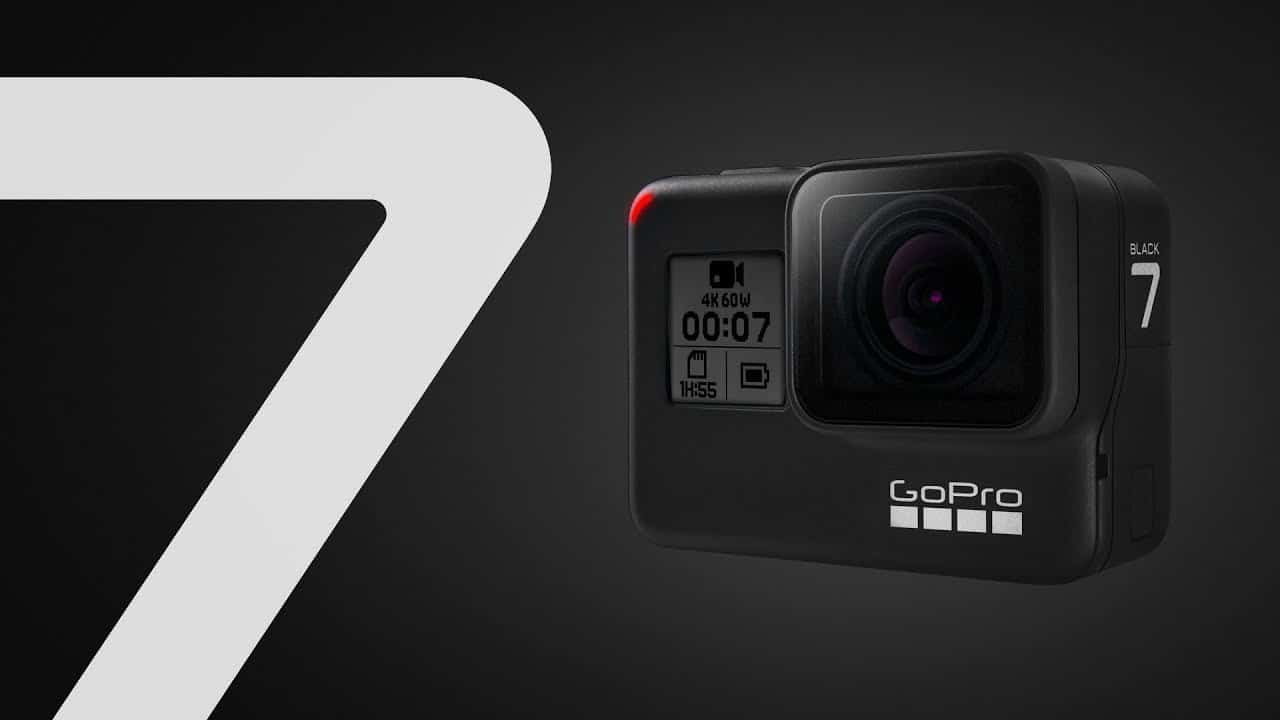 Right next to GoPro Hero 8 the Hero 7 Black is no Joke. The action camera is built for rough use making it the best action camera for motorcycle. T

he hyper smooth feature is a 3 axis electronic stabilization which is equivalent to a handheld gimbal stick which helps to take more stabilized shots.

Another interesting feature of the Hero 7 Black is the voice control feature where the GoPro recognized over a dozen voice commands covering main tasks. As compared to the GoPro Hero 6 the audio performance has been revamped on Hero 7 Black.

You also don’t have to worry on a rainy day as the Action cam is built up ready to go on motorcycle rides as it is waterproof. For low light scenes, the Hero 7 features a low light feature that produces better picture quality. The only downside of this GoPro is the touchscreen which occasionally fails to respond to touch.

The Time Warp feature is a stabilized Hyperlapse which helps a lot if you want to take time-lapse videos on your motorcycle trips. 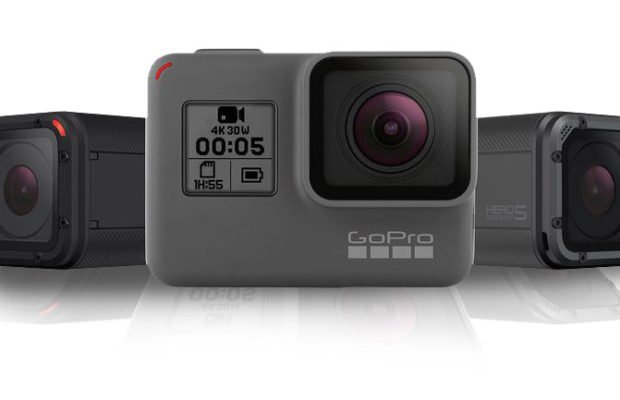 No matter how old it gets, the Hero 5 Black remains the best budget GoPro for a motorcycle. The company keeps on updating it with new features through its app. You can take amazing 4K, 2K at 30fps, and 1080 at 60fps according to your choice and still have an amazing image quality. The action camera is waterproof up to 33 feet without a case.

Featuring a built-in GPS and voice control feature which understands a dozen more commands than any other action camera with over 7 different languages. Though due to wind and other noise you may have to struggle sometimes with voice control. The Hero 5 has a 1220mAh battery which gave me around an hour and a half video footage when shot at 1080P at 60FPS.

GoPro has also updated the software which now eliminated lens distortion. The electronic image stabilization is good enough not to disappoint you on your motorcycle trips.

I had to wait a long time to get my first action camera. Back then  I figured out how to make some quick money with my motorcycle. It took me a while but I was able to get the GoPro Hero 5. Since then I was never disappointed with my Hero 5. 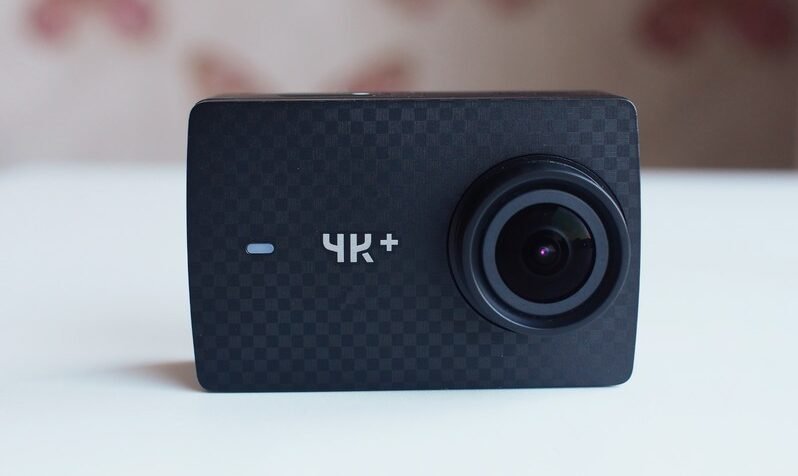 Titled as the World’s best value-packed action camera. The YI 4k+ is just as good as the Hero 6 Black. Having a much bigger touch screen the YI is lighter than the Hero 6.

What makes this action camera so appealing is the 12 MP Sony CMOS Sensor with Exmor R integrated with Ambarella H2 + Quad-Core ARM cortex A53 processor which gives super-fast responsiveness and interface.

The YI 4k+ is capable of shooting up to 4k at 60fps. Another amazing thing about this camera is its 1400 mAh battery which lasts up to 2 hours when shot at high resolution. The only downside of the YI 4k+ is that it is splashproof but with an added accessory of a waterproof housing case that can be solved.

With built-in electronic image stabilization, it also adds up voice control features. The mobile app is quite user friendly which allows us to control every option on the action cam. 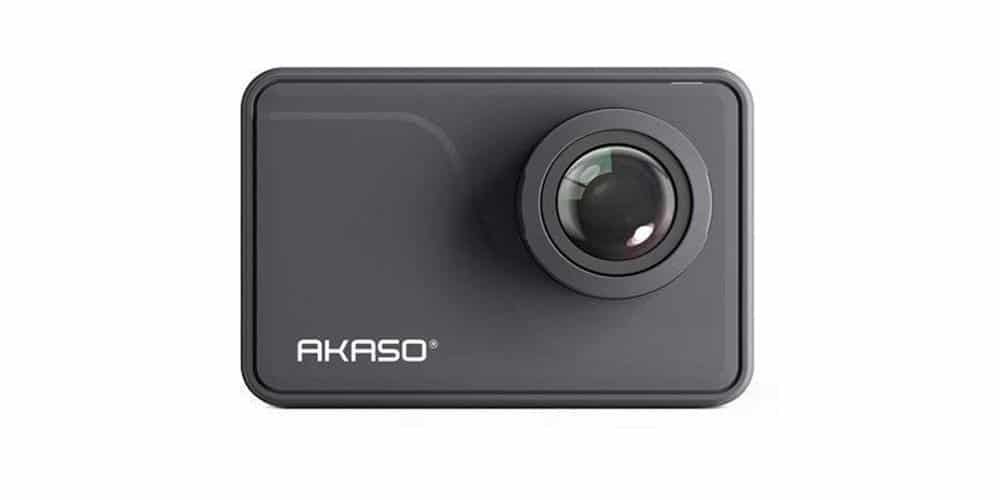 The built quality of the Akaso V50 Pro is nice and the well designed waterproof housing lives up to 98 feet. The camera is capable of shooting up to 20 MegaPixel and houses an 1100 mAh battery. The best part of Akaso is that it is compatible with any GoPro accessory.

For better usability, the V50 has an app to take over its control. With built-in WIFI, an adjustable field of view, and electronic image stabilization it’s really impressive what you get at a fraction of a price.

From my personal experience, the Akaso V50 Pro is best for 4K shooting though at 1080P and below it loses its quality. Also, the V50 Pro lacks detail in low light conditions. 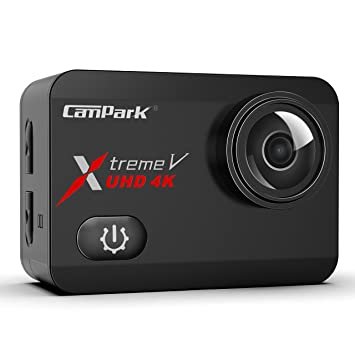 This action cam is surely a deal-breaker. The Campark X30 could be your beginner GoPro at an affordable price. The X30 can shoot raw footage up to 4k at 60fps. It also captures 20 MP shots with great details.

The best part of the Campark X30 is that you get 2 batteries right out of the box which lasts up to 2 hours each depending on your usage.

For motorcycling, the X30 features an advanced electronic image stabilizer to ensure smooth and steady footage. Also, you don’t have to worry about getting the cam out in the water as the X30 is waterproof up to 130 feet deep.

Talking about the design, the X30 is built for durability with a good appearance. A lot of customers are impressed with the impressive quality of videos and images provided by the Campark X30.

In terms of usability to the X30 has a 2-inch touch screen that is quite responsive. Overall in this price bracket, there is one winner and that is the Campark X30. 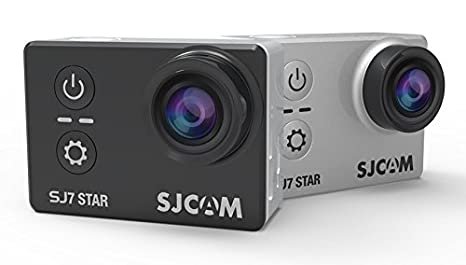 Let’s call the SJCAM SJ7 Star a solid performer. The SJ7 Star is built with an aluminium casing metal body. What’s best about this action camera is the combo power of the Ambarella processor and Sony sensor.

The video quality of the SJ7 Star is crisp, capturing a ton of detail. With built-in Wifi and gyro stabilization, the camera would do a good job to stabilize your motorcycle rides.

Another plus point is the 2-inch touch-responsive screen which also works with the waterproof case on. The SJ7 Star features a fisheye lens with a 166-degree field of view.

According to the usage the 1050mAh can last between 1 to 2 hours. You can shoot up the video resolution up to 4k at 30fps. The SJ7 Star is a budget GoPro for motorcycles with great build and video quality.

Almost all GoPro’s can be mounted to motorcycle helmets. But not everyone likes to chin mount since they don’t work on most helmets (at least when you have limited accessories ). Also in the event of an accident, it is more likely to hit something since it sticks out.

Though it is a personal choice we have picked the best GoPro for a motorcycle helmet with excellent image stabilization, minimum distortion, and great low light footage.

Being almost 3 years old the Sony FDR-X3000 is the only action camera with a 3.5mm jack and Zeiss Tessar lens. The unique feature of the FDR-X3000 which no other GoPro has is the Field of View, Optical Image stabilization, and audio quality.

The FDR can shoot 4k videos at 30FPS and 1080P at 120FPS. It has a separate focal length video option to record in wide, medium, and narrow Options which helps to avoid fish-eye distortion, unlike the GoPro Hero Series.

What makes it the best GoPro for a motorcycle helmet is its sleek design which can be neatly mounted to the side of the helmet. Unlike all other GoPro for motorcycles that come with Electronic Image stabilization, the FDR comes with Optical Image stabilization which means that the lens adjusts itself on its own and stabilizes the footage. 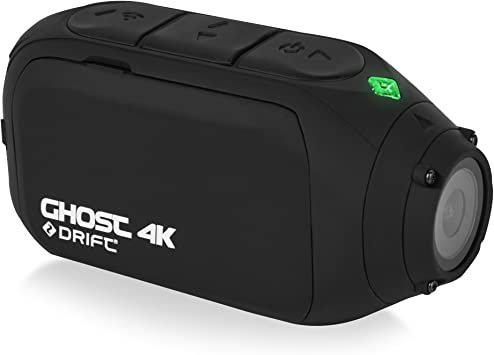 The Drift Ghost 4K is a killer GoPro for motorcycle riders. If you are into extreme action then this is the best GoPro for a motorcycle helmet. The modular and compact design makes it so lightweight to be attached to a helmet. By its name it shoots 4K ultra HD with 30 fps, also it serves stunning slow motions in 1080P at 120fps.

The best thing about the Ghost 4K is that you can align your view up to 300 degrees with its rotating lens. What would concern some people is the 2-inch viewing LCD screen but considering its sleek design it’s not much of a deal-breaker.

There is an inbuilt mic and in case you want to use an external microphone, there’s a jack available for it.

Another plus point of this action camera is that its battery lasts up to 4 hours when compared to other GoPro for motorcycles. The Drift Ghost 4K features a Clone mode where you can sync up to 10 Ghosts via Wifi and control recording with one device.

The company also provides a wrist band 2 way led remote control which is used to start and stop recording. Rolling towards the quality there’s no doubt about the Ghost 4K, its robust, ready to be used under extreme conditions, and ready to take amazing actions.

Every GoPro has its pros and cons. Always look at what you want from an action cam. The best GoPro for motorcycle riding should be easy to use while you are riding.

Depending on how long you would be using it take note of the battery performance. And make sure that the built quality is really good as you will be dropping it from time to time. Apart from that you can choose anyone from the list and get going.

Let us know about your favourite Action Camera in the comment section below! 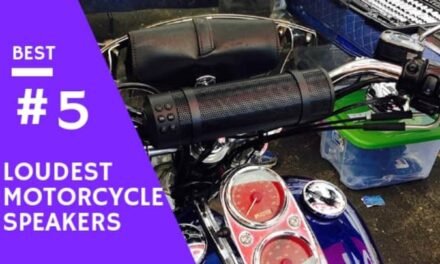 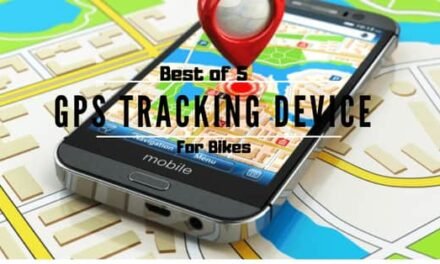 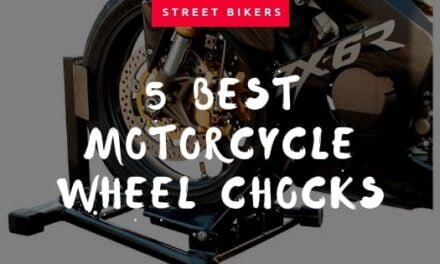 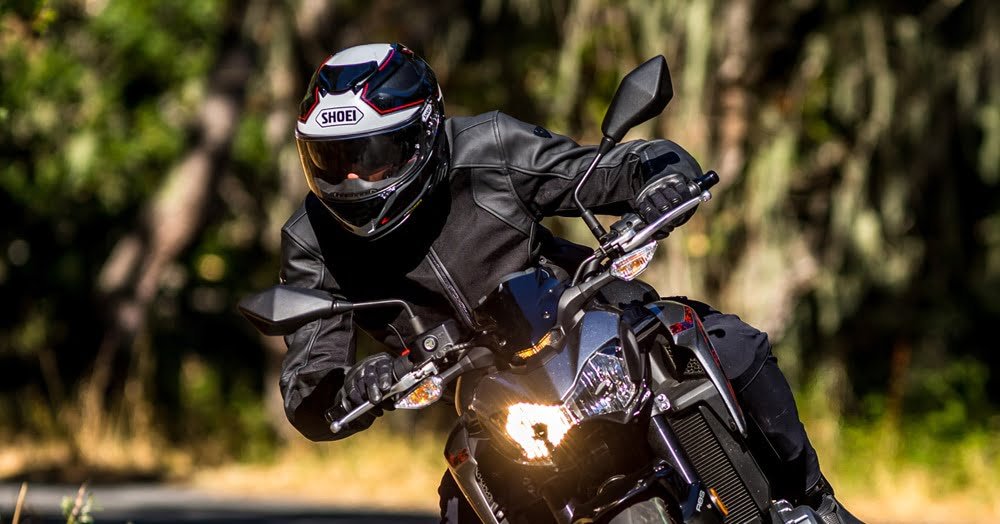 I’m Castro Raj. Since childhood, I was passionate about motorcycles. I got my first Bike when I turned 16. Ever since then, I’ve been tearing up the trails and immersed myself in this Pasion. I’ve learned from on-the-ground experience about different types of bikes and what works and what doesn’t. From my experience, I want to spread awareness on safe riding!